Renewables could do much more than just transform Africa’s energy sectors. Here’s how

This article is part of a series by GET.transform and Sun-Connect News about the changing nature of the Productive Use of Energy (PUE) landscape. We hope to inspire a new dialogue on Energy for Rural Industrialisation, inviting practitioners to discuss opportunities and shape the sector to capitalise on emerging trends. Join the conversation through the hashtag #E4RI on LinkedIn or Twitter.
If you would like to contribute to the discussion, please send your blog or article to mail@sun-connect.org.

Sustainable, renewable energy is fundamental to Africa’s future. By 2050, the continent will be the home of 2 billion people, and two in five of the world’s children will be born there.

Meeting their needs with sustainable sources of modern energy – for consumption and production – will be essential to social welfare and economic development.

This is particularly acute on a continent that is home to 33 of the world’s 47 least-developed countries (in the UN classification), and where less than half of people have access to electricity. 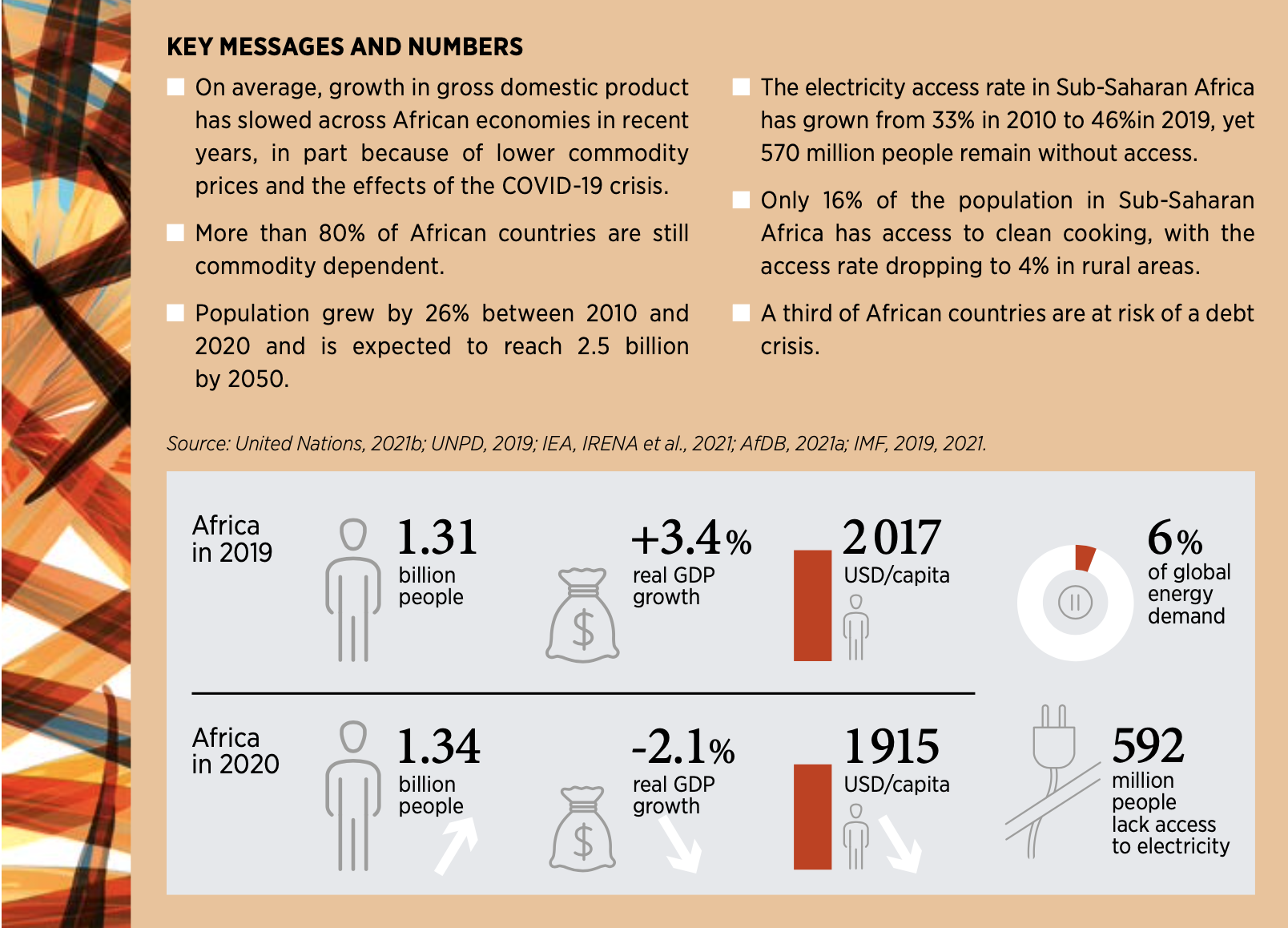 The African continent is rich in renewable energy sources, though many of them remain heavily underutilised until today.

This is in addition to sizeable, additional potential for hydropower (1,753 GW), and wind energy (461 GW), as well as in some parts of Africa geothermal and modern bioenergy.

In addition to being environment- and climate-friendly, and often highly cost-effective compared to the long-run costs of imported oil and natural gas, renewable energy also holds large potential for wider significant socio-economic benefits in Africa.

IRENA’s modelling reveals that when accompanied by an appropriate policy basket, a systematic shift of Africa away from fossil fuels towards an energy system based on renewable energy could lead to 6.4% higher GDP, 3.5% more economy-wide jobs, and a 25.4% higher welfare index throughout the outlook period of 2020 to 2050.

Two of the most notable opportunities associated with the energy transition in African countries identified by IRENA’s and the AfDB are greater fiscal stability and job creation.

For many African energy importers, renewable energy holds great potential to reduce vulnerability to the external shocks caused by movements in the price of fossil fuels.

Renewables can also play a central role in creating jobs, because investing in energy transition technologies creates up to three times as many jobs as fossil fuels per million of dollars spent.

IRENA’s model also reveals jobs created in the renewable energy transition will outweigh those lost by moving away from traditional energy, including in many fossil fuel producing countries.

Despite the immense promise of the energy transition, Africa received only 2% of global renewable energy investments in the last two decades, with the vast majority of these investments flowing to just a handful of countries, according to IRENA’s analysis. Without rapidly scaling up energy transition investments, the world will not be able to meet global sustainable development and climate commitment.

This is also reflected in a report by the International Energy Agency (IEA), released in 2021 in collaboration with the World Bank and the World Economic Forum, which highlights that by 2030, annual clean energy investments in emerging markets and developing economies need to be multiplied by more than seven – from less than $150 billion in 2021 to over $1 trillion – to put the world on track to reach net-zero emissions by 2050.

Potential bold proposals and frameworks that help enable investments in emerging and developing economies are accelerated further in the Mobilizing Investment for Clean Energy in Emerging Economies Initiative.

In order to drive impact on the ground, the team forms country-specific working groups to deep-dive into solutions that overcome investment barriers in a specific geography. The initiative holds a Nigeria ‘deep dive’ in collaboration with the Renewable Energy and Energy Efficiency Associations – Alliance (REEEA-A).

The alliance is an umbrella body for private sector organizations working in renewable energy/energy efficiency, with a mission to spearhead the sector, in research, policy and regulatory support and analysis, capacity building and interest representation both within and outside Nigeria.

Moving towards a just energy transition in Nigeria

A myriad of issues are accelerants of energy transition which has gained traction lately. They include: energy poverty, energy security, energy sovereignty and geopolitical interest of different states, climate change and lately the COVID 19 pandemic and its disruptions.

A just transition in energy transition discourse for Nigeria means dealing with the economic and social fallout of movement from the fossil fuel-based energy system to a low carbon system, with impacts including stranded assets, loss of jobs and livelihoods.

Although renewables can play a very important part in Nigeria and Africa it cannot in the short term cover all needs, similar to the transition in developed economies, and is important to adapt to the local context.

The country has recorded some milestones in terms of appropriate policies and programmes. This includes the development of its energy transition plan (ETP); introduction of its first building energy efficiency code, which sets minimum 20 standards for energy efficiency for new buildings; and Nigeria’s Sustainable Energy for All (SE4ALL) Action Agenda, which has a target of almost tripling generation capacity in the next decade, to reach a total of 30GW by 2030.

Of this 30GW, 30% will be generated from renewable resources. In energy access, there is the ambitious Energy Compact, which includes the government’s flagship project to provide 5 million households and 25 million people with decentralized solar energy solutions, amongst others.

Risk of the high dependency on fossil fuel exports

Indeed, the energy transition holds large opportunities for those countries in Africa that might traditionally be expected to be most opposed to the shift away from fossil fuels. Many African countries remain highly dependent on commodity exports, including fossil fuels.

In the context of a low-carbon future, fossil fuel-dependent countries are increasingly exposed to the risks of stranded assets, with nascent manufacturing capabilities caught between changing approaches to energy.

Because fossil fuels remain among Africa’s largest exports, many hydrocarbon-exporting countries may face difficult socio-economic challenges if they miss the opportunity to diversify their economies today.

And the renewables industry also holds large, wider structural benefits for Africa’s economies. With commodity exports remaining a primary source of income for many African economies – from agricultural produce and textiles to minerals and fossil fuels – energy transition-related technologies such as renewable energy have, in principle, much to offer to these economies.

Local supply chains for renewable energy and energy efficiency technologies could help diversify economies, and create those above-mentioned jobs, in a wide range of areas – from installation and maintenance to auditing and policy design.

Access to affordable, reliable and sufficient energy is a crucial enabler of livelihoods, public services including the provision of modern health services and education, agricultural productivity – and hence food security, industrial development, and the capacity of communities and enterprises to adapt to shocks.

The magnitude of the task is most apparent in Sub-Saharan Africa, which had an electrification rate of 46% in 2019 and where 906 million people still lack access to clean cooking fuels and technologies. 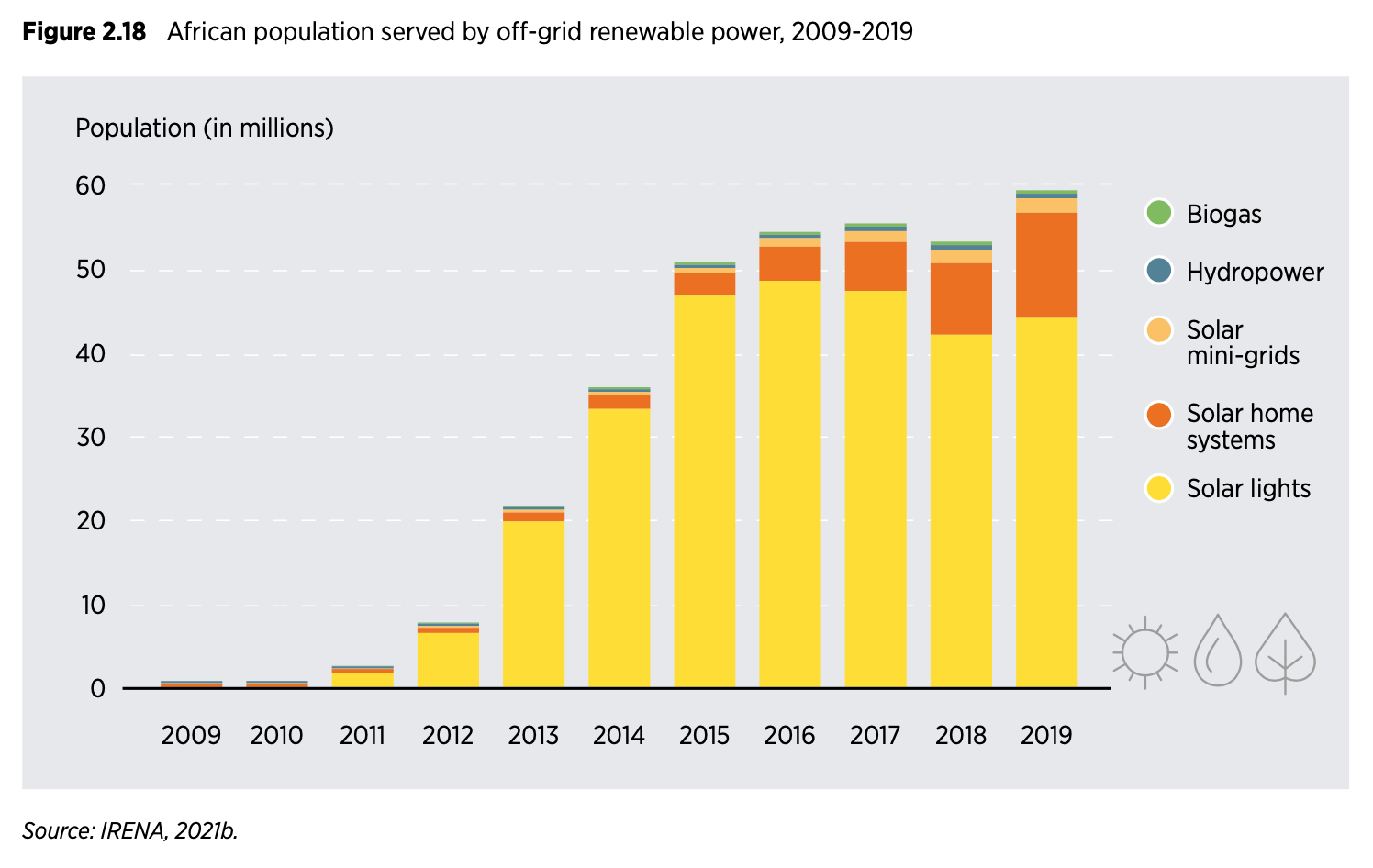 Nearly 60 million people in Africa already have electricity access through off-grid solutions, according to IRENA data, and the number is likely to increase substantially as more African countries seek ways to fulfil their energy access targets.

Energy development is intrinsically related to core socio-economic issues in Africa, and the deployment of renewables can help countries across the continent achieve their objectives.

In doing so, renewables will avoid trapping economies and societies in increasingly obsolete energy systems that burden them with stranded assets and limited economic prospects for sustainable development.

How to get there? Africa is extraordinarily diverse, and no single approach will advance its energy future.

The answer will very likely have to be a combination of institutional capacity building, well-chosen policies and a substantial contribution by the international community – technologically as well as financially.

The COVID-19 pandemic has underlined in dramatic fashion that no country is an island unto itself, and that global solidarity is key.

Transitions from traditional energy sources also require inclusive planning and consensus building, including at the intersection of at times competing interests of those advocating for poverty alleviation, short- versus long-term economic priorities and environmental considerations.

This is not an easy task for any country, but it is, and will be, achievable, if enough commitment is made, and priorities start to take seriously those opportunities that renewable energy and the energy transition offer to Africa.

REEEA-A is a product of a bilateral arrangement between a technical assistance programme co-funded by the European Union and the German government and implemented by the German development agency GIZ, in collaboration with the Federal Ministry of Power of Nigeria. The parties realized that the vast landscape of RE/EE associations in Nigeria and organizations provides a lot of opportunities for collaboration to effectively push forward the national agenda in the RE/EE sector in Nigeria.

The Alliance is an umbrella body for private sector organizations in RE/EE, with a mission to spearhead the RE/EE sector, in research, policy and regulatory support and analysis, capacity building and interest representation both within and outside Nigeria.

More articles about Productive Use of Energy for Rural Industrialisation:

Jobs or just lights? Nigeria toils to power up its solar promise

Agrivoltaics is the future of farming, but more solar PV + plant research is needed

Solar-power, energy efficiency and business support give rice producers and processors the competitive edge in Benin

Decentralised Access to Electricity Through Mini-Grids – experiences from Tanzania

Barriers to Scaling Productive Use of Energy

Renewables could do much more than just transform Africa’s energy sectors. Here’s how