Solar energy is the way for this village in South Africa

While many talk about moving towards renewable energy sources, a rural Limpopo community is showing the way after embracing solar energy to escape load shedding and high electricity tariffs.

Each time the Matsila Community Development Farm was struck by a power outage, many of the 500 workforce were forced to down tools and go home, leading to an interruption in production and earnings.

The constant blackouts were caused either by load shedding or when Eskom cut off the supply owing to non-payment of the steep electricity bill.

“At some point we were owing Eskom around R300,000. But load shedding was also a major problem, it was hitting us really hard,” says Chief Livhuwani Matsila, who heads the Matsila royal family in Limpopo. 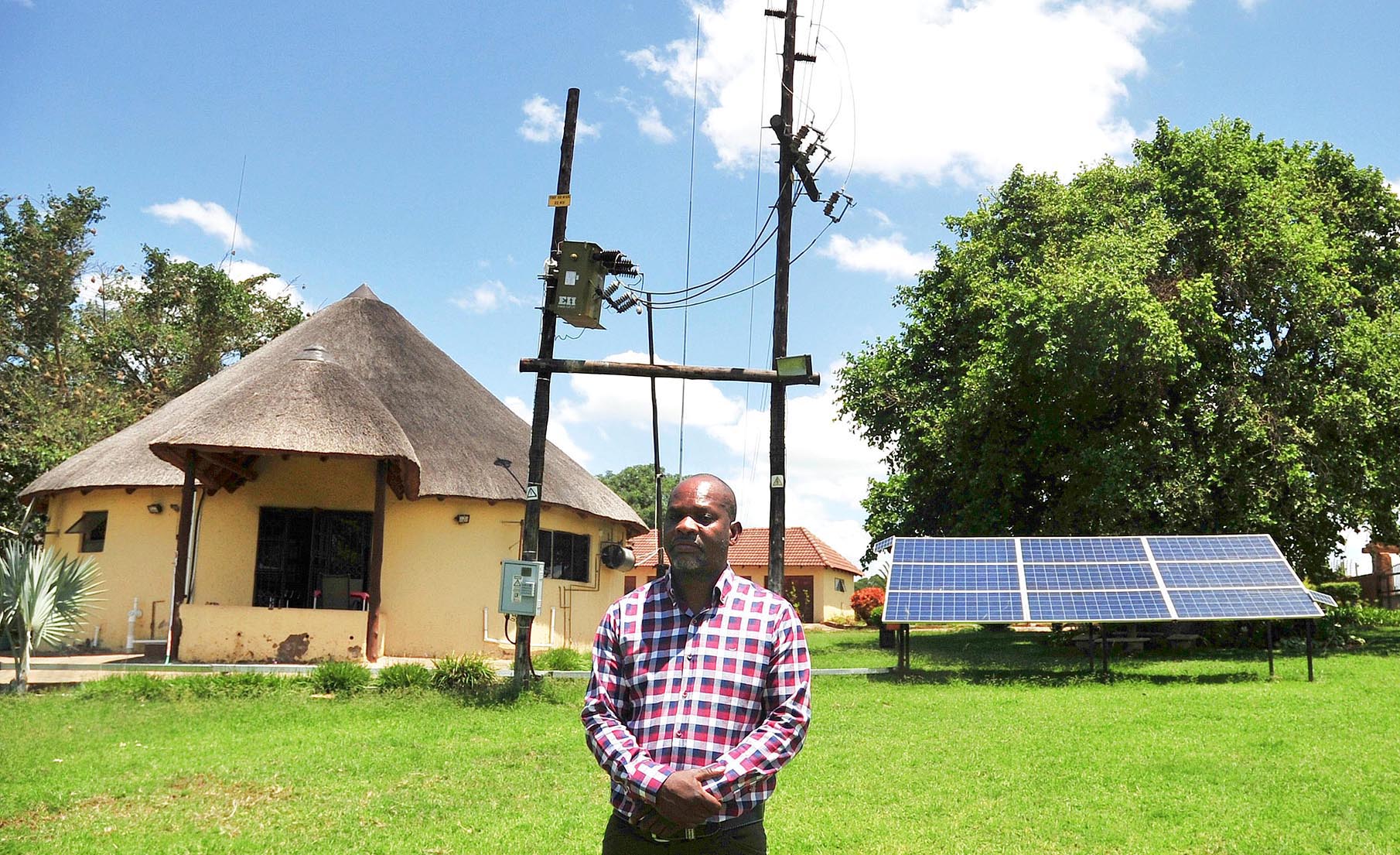 The Matsila development project, which offers residents an opportunity to earn a living in an area with high levels of poverty and unemployment, was established in 2007 by the royal family as part of its community development initiatives.

It includes cattle, chicken, vegetable and game farms, an abattoir, a guesthouse and an arts and crafts centre. The game farm, which is in the village, is home to disease-free buffalo and eland. The cattle farm boasts the prized Ankole breed native to the Great Lakes region which includes Rwanda and Uganda. 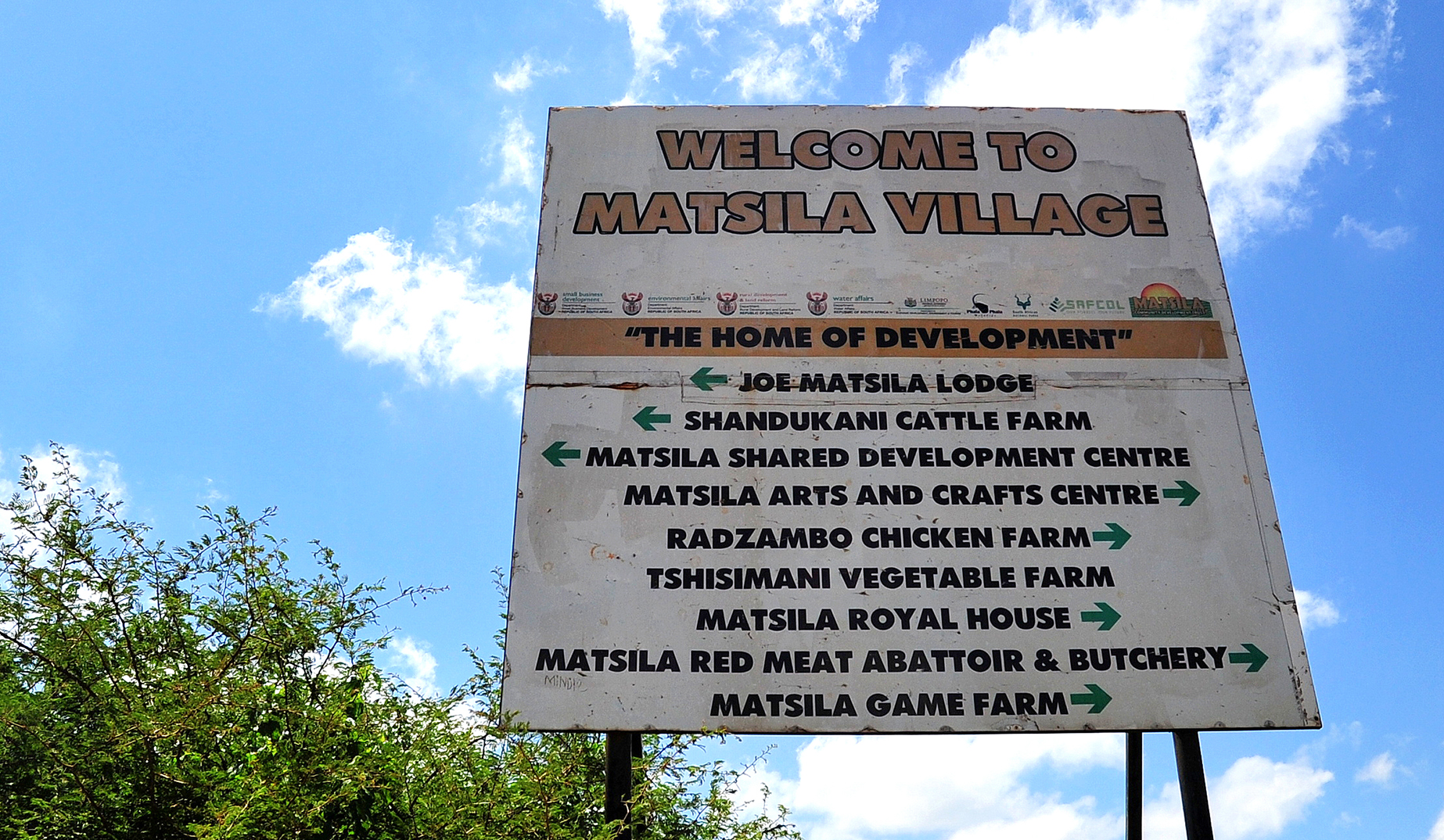 Until recently the farm project was completely reliant on Eskom’s electricity grid, which was also powering 10 community boreholes to supply the four villages under the Matsila administration near Elim in the Collins Chabane Local Municipality.

But now, there’s bad news for any workers who might have enjoyed the work-interrupting power outages – blackouts are a thing of the past after the farm project recently migrated from Eskom’s grid to solar energy.

Matsila says the project was made possible by risk investment company 91 which financed the implementation of the project following a proposal presented by the royal family. 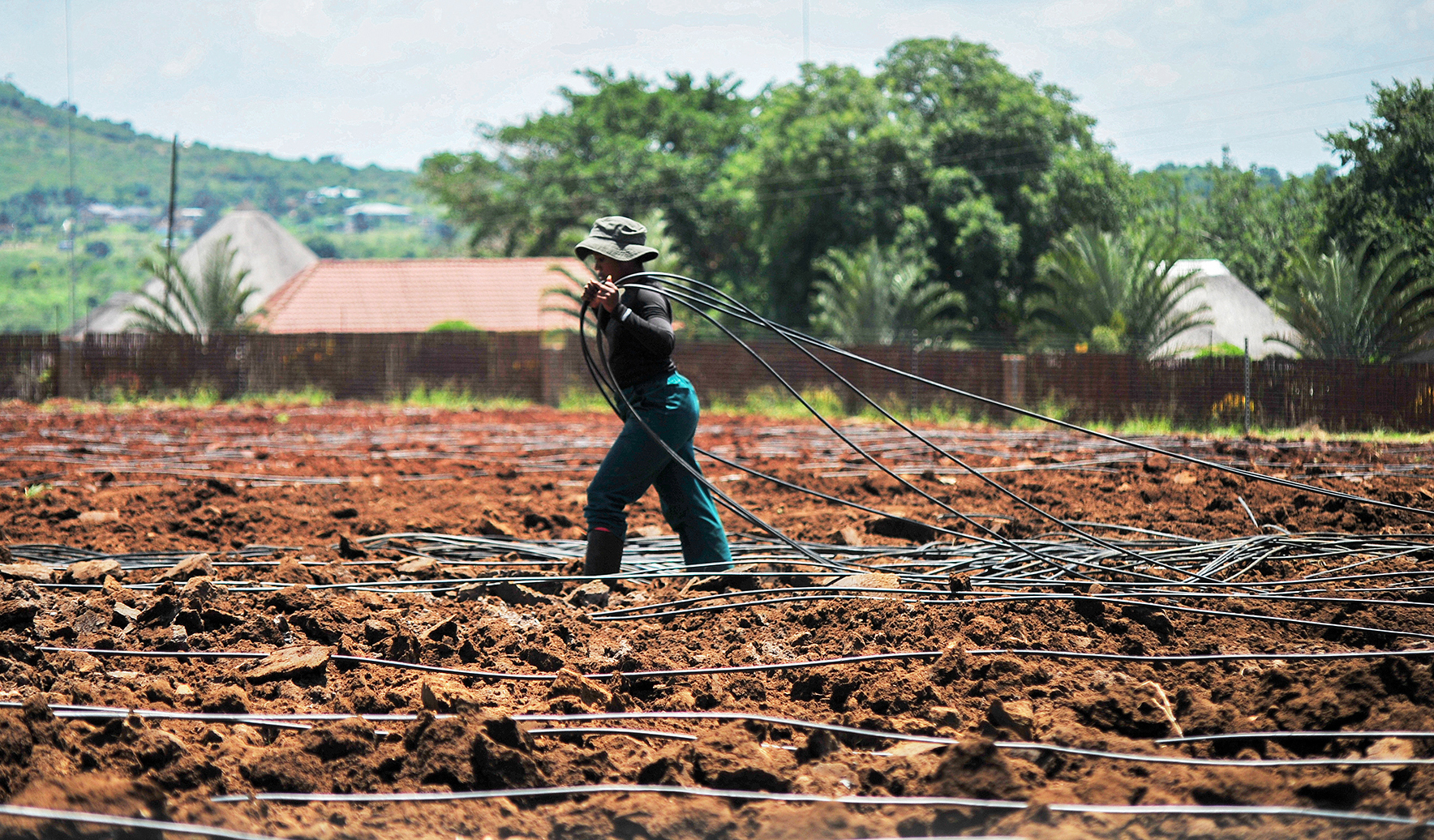 Each time the Matsila Community Development Farm was struck by a power outage, many of the 500 workers were forced to down tools and go home, leading to an interruption in production and earnings. But a switch to solar energy has changed that.
(Photo: Lucas Ledwaba / Mukurukuru Media)

There are seven solar plants on the farm, which produce 520 volts each. Besides powering the farm project, they also supply energy to the 10 boreholes, each of which produce 50,000 litres of water per hour to fill up three 250,000-litre reservoirs that supply an estimated 10,000 residents.

“The electricity cost was just unaffordable. Our financial resources were being channelled to paying the electricity bill. We were paying about R40,000 a month,” says Matsila, who holds a master of science in ecology degree and is a former head of the ANC’s parliamentary caucus.

Matsila says the financial situation at the project worsened during the Covid-19 lockdown.

“There was no production on the farms for almost a year because all our workers had to stay home. We lost a lot of crop production yield and we could no longer afford to pay Eskom,” he says.

Matsila now plans to take the solar power project to another level.

“Our vision is to eventually become a fully-fledged eco-village. In the next three years we want to be known as the Matsila Eco-Village,” he says. 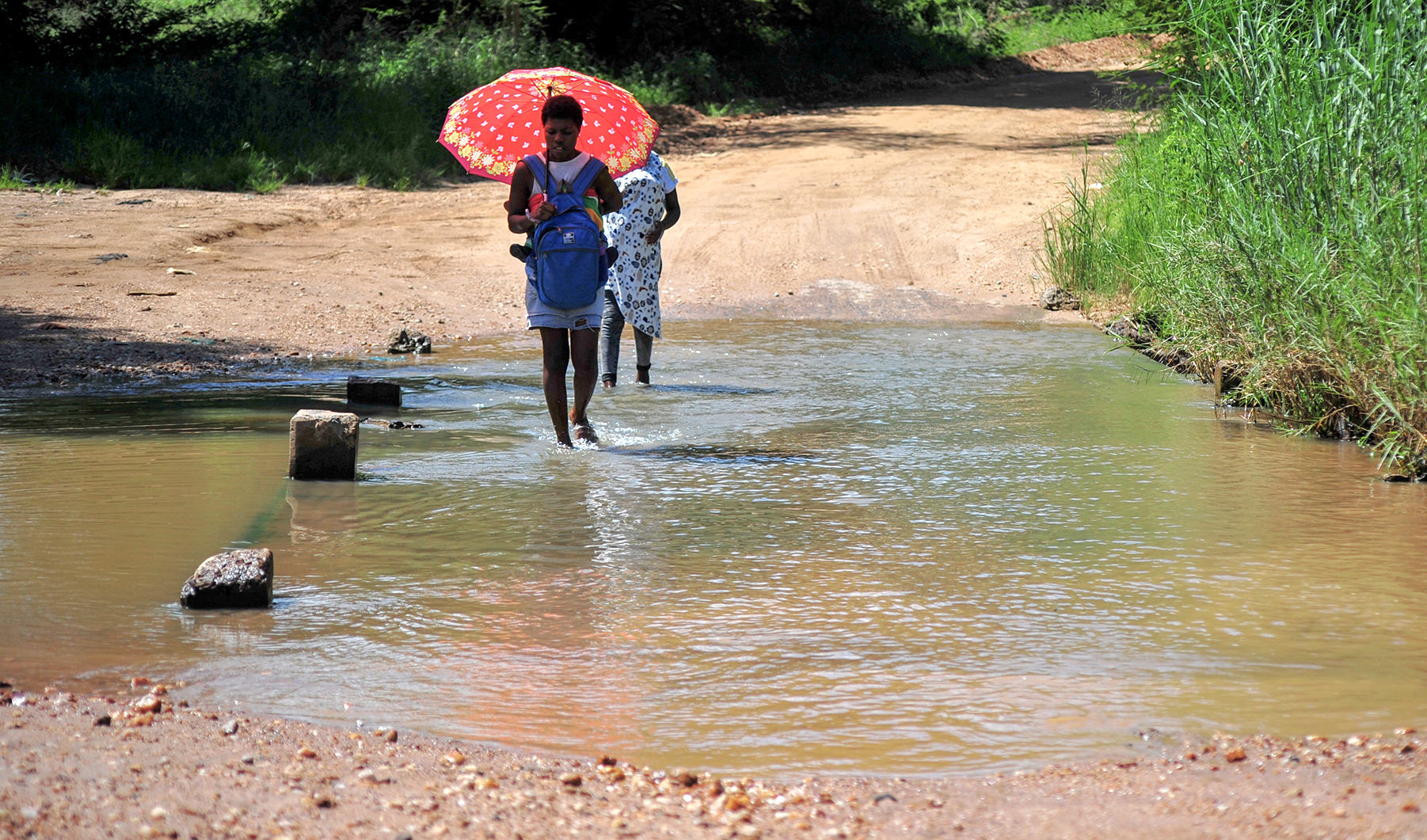 Women walk across a river on their way from a clinic in Ha-Matsila in Limpopo. The village which now enjoys access to clean running water is about 60km from the Nandoni dam where a woman was devoured by a crocodile while drawing water earlier in 2022.
(Photo: Lucas Ledwaba / Mukurukuru Media)

The next phase includes the installation of solar-powered streetlights for the village through a public-private partnership. Matsila argues that while it is currently quite costly to buy and install solar power, it is cheaper and more environmentally friendly in the long term.

“For the next 10 years we don’t have to worry about maintenance. We have been advised that we only have to replace the batteries in 10 years, but the solar panels will remain intact for much longer if we look after them,” he says.

Matsila says they have instilled a sense of ownership in the community which has seen them work together to protect public infrastructure from vandalism and theft. Residents use an age-old alarm system in case of danger: blowing a whistle to alert everyone.

“We have not had any cases of vandalism. Our people have adopted a powerful sense of ownership of the assets and infrastructure in the villages,” he says.

The Matsilas’ move to solar power is in line with the Sustainable Development Goals (SDG) adopted by the United Nations in 2015 as a universal call to action to end poverty, protect the planet and ensure that by 2030 all people enjoy peace and prosperity.

SDG 7 seeks to promote investment in solar, wind and thermal power, improving energy productivity, and ensuring energy for all by 2030. 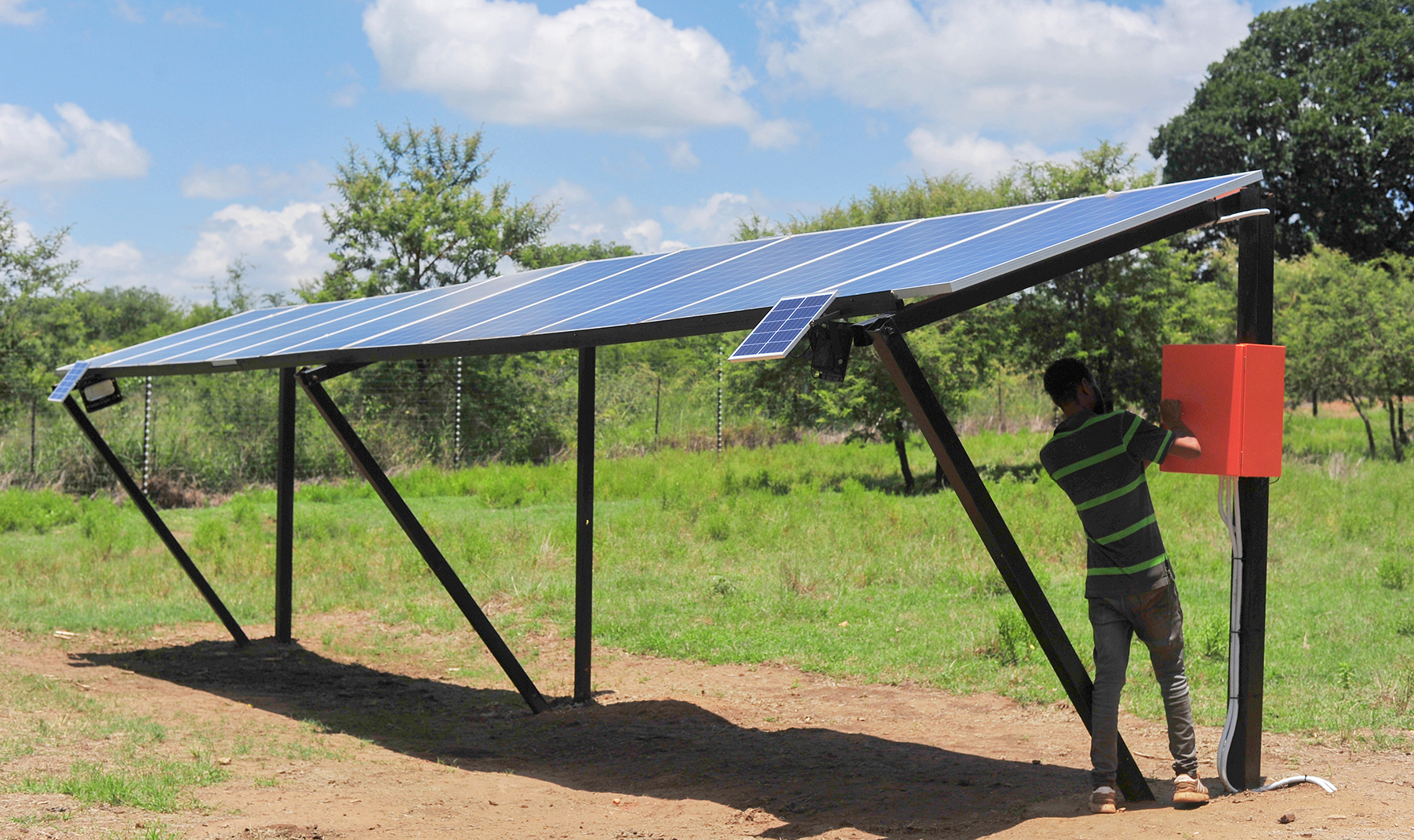 An employee at the Matsila farm checks on one of the solar stations that powers a borehole supplying water to animals on the property.
(Photo: Lucas Ledwaba / Mukurukuru Media)

A 2021 report, “Tracking SDG 7”, released by the UN, World Bank and WHO, among other organisations, noted that while more than one billion people gained access to electricity globally over the past decade, Covid-19’s financial impact has made basic electricity services unaffordable for 30 million more people, the majority in Africa.

South Africa, like other industrialised nations, is also under pressure to reduce its carbon footprint, and moves towards solar energy could help to achieve this. According to the Department of Mineral Resources and Energy, about 77% of South Africa’s primary energy needs are provided by coal.

Matsila says they are looking at various models, including a partnership with the government and the private sector to fund a project that would ensure every household in the villages migrates from the Eskom grid to solar energy.

Although the Matsila Community Development Trust has made a difference in the lives of those employed there, it is estimated that 52% of its people live below the poverty line. 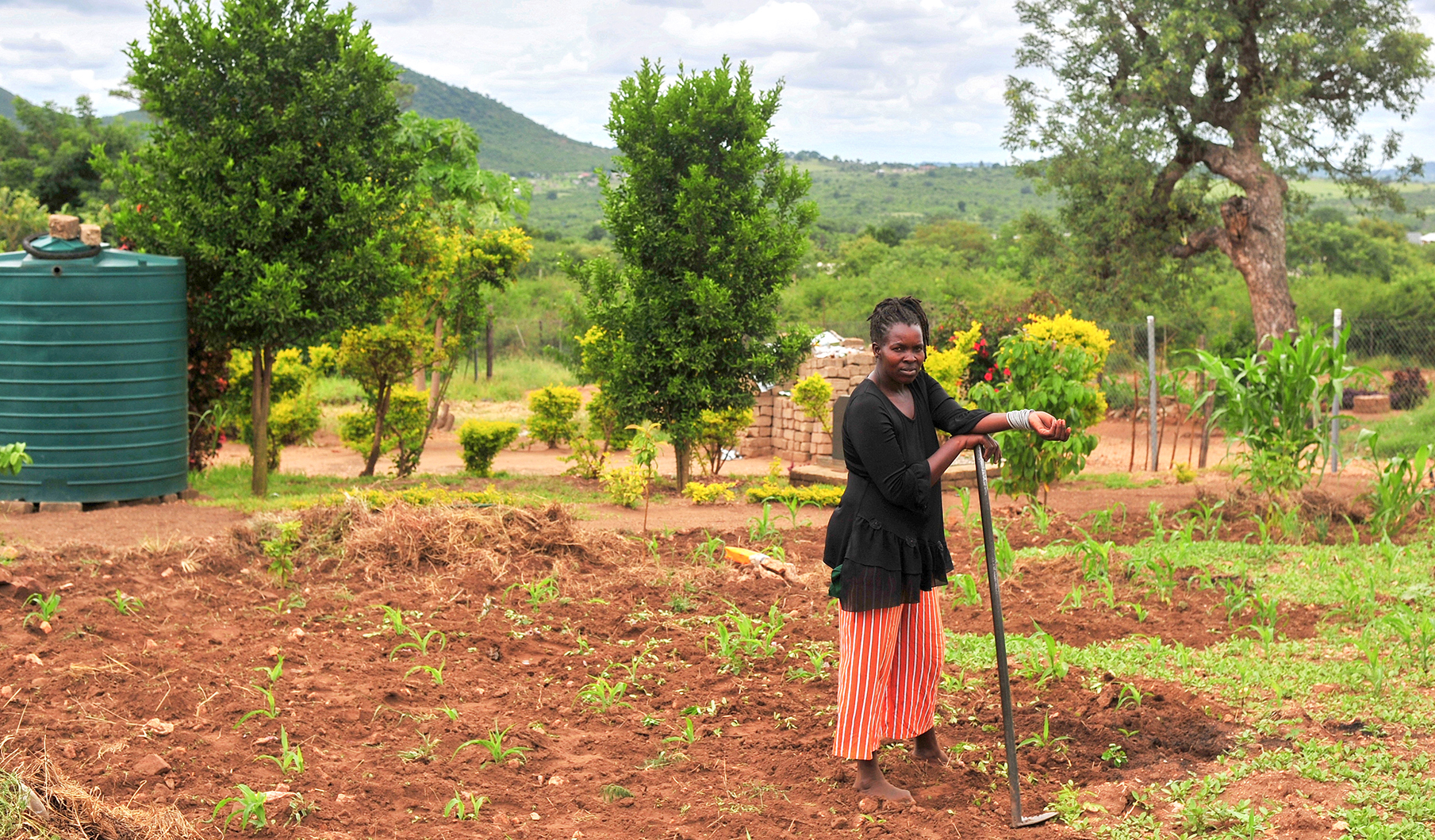 Subsistence farmer and Ha-Matsila resident Khensani Mitileni says she now has a regular water supply, unlike in the past when the taps only ran a few times a week. (Photo: Lucas Ledwaba / Mukurukuru Media)

The National Energy Regulator of South Africa approved an average tariff increase of 9.61% for Eskom’s standard-tariff customers. It took effect from 1 April. This could mean that many impoverished residents, like those of Ha-Matsila, face more strain on their already empty pockets to buy electricity.

The migration to solar energy has already made life a lot more bearable for residents who now receive a free, 24-hour supply of clean water and no longer have to spend the little money they earned to buy it from private dealers.

Matsila says the availability of water will increase food security since residents can now grow their own food. There are four villages with an estimated 4,000 people under the Matsila authority, but the water project is set to benefit three other villages.

Pensioner Khathutshelo Mabasa, who has lived in the village of Ha-Matsila all her life, recalls with a forlorn look the many years when they were forced to rise at dawn daily to search for water across the villages, carrying empty containers on wheelbarrows. 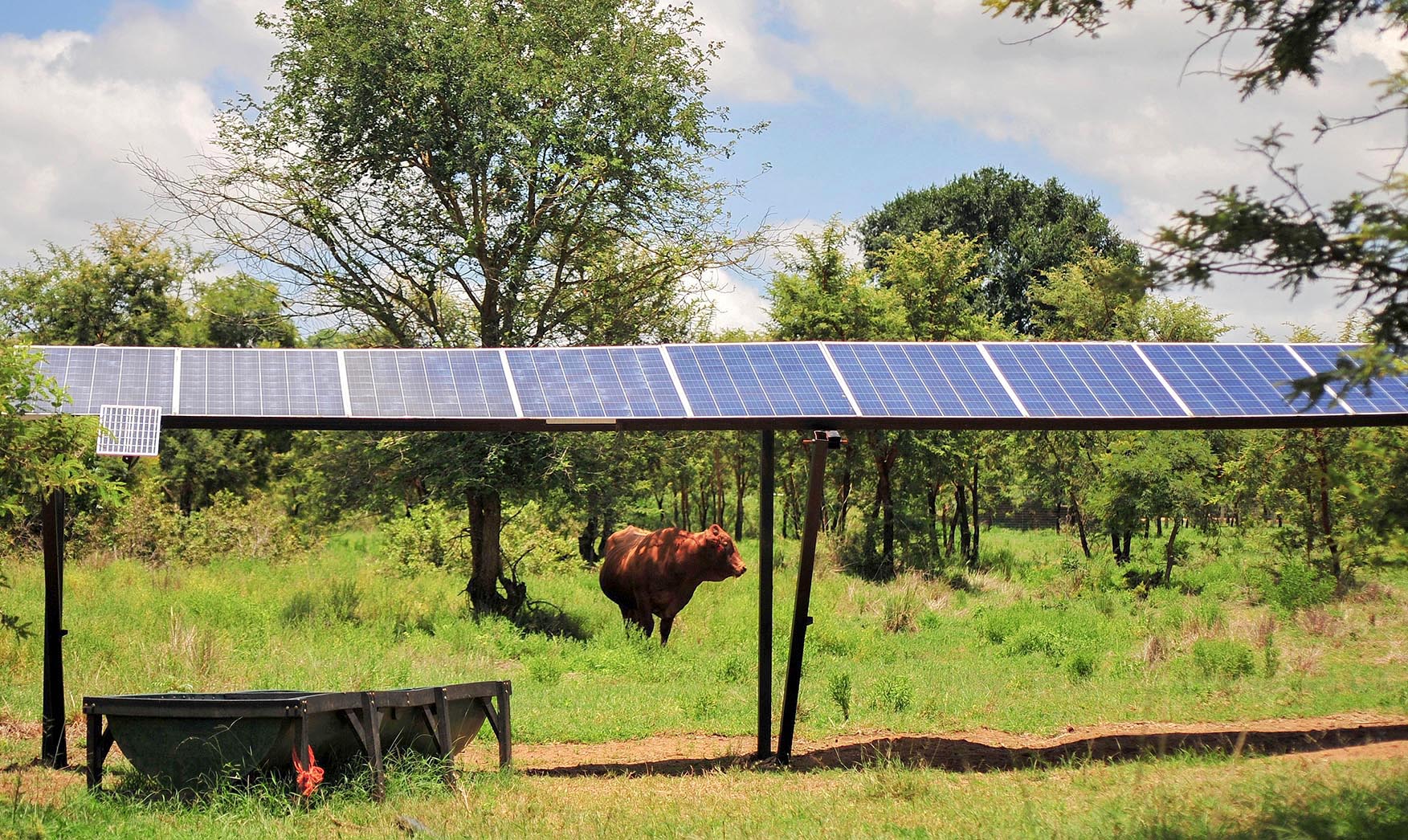 There are seven solar plants on the Matsila, Limpopo community farm, each of which produce 520 volts. Besides powering the farm project, they also energise 10 boreholes. (Photo: Lucas Ledwaba / Mukurukuru Media)

“We used to walk all morning, going from one area to the next looking for water. That was our daily life, but I am happy that has now changed,” she says.

Another resident, Khensani Mitileni, was not spared the desperate search for water despite having a communal tap installed right on her doorstep.“We used to walk all morning, going from one area to the next looking for water. That was our daily life, but I am happy that has now changed,” she says.

“Sometimes the taps ran three times a week. Then at times we would go for a long time without any water. But since this solar project started we have every day,” says Mitileni as she leans on a plough to take a break from working in her field.

She has planted mielies, vegetables and citrus fruit in her small yard, which, she says, ensures that she doesn’t have to spend any money on staple food. 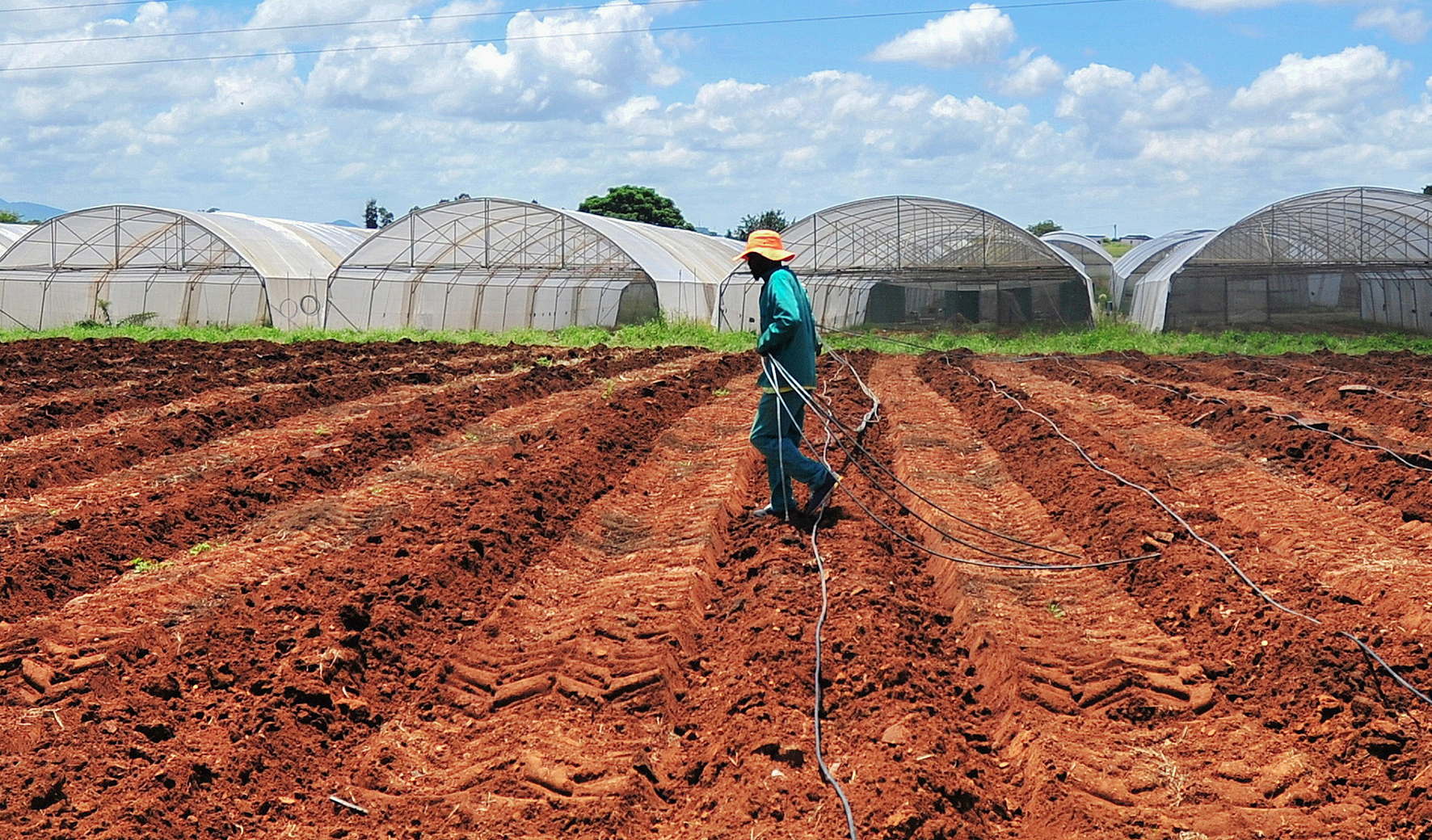 Workers at the Matsila community farm in Limpopo no longer have to worry about power outages thanks to a move to solar energy.
(Photo: Lucas Ledwaba / Mukurukuru Media)

The village is about 60km from the Nandoni dam where a woman was devoured by a crocodile while drawing water earlier in 2022. Ha-Matsila is about 70km west of Giyani where residents of more than 50 villages are still not connected to a water supply despite the government spending more than R3-billion on a water supply project.

Matsila says too much reliance on the government slows down development, especially in rural areas, and it is about time community leaders pursue other ways and models to speed up development.

In those difficult days, when water was scarce due to power issues, the Matsila community often wished and prayed for rain. But after the latest developments they face a challenge of a different kind.

“Now we don’t know if we should pray for the rain or pray for the sun (to provide energy to the solar plants),” says Matsila. DM/MC/Mukurukuru Media