‘How I Rose From A Marketer Earning N5,000 To Solar Entrepreneur’, Nigerian Shares Story

Recently, a huge number of the Nigerian population have adopted the use of solar as an alternative for epileptic power supply and solar entrepreneurs are making fortune from the trend.

Ubong Sunday an entrepreneur dealing in renewables is one of the entrants in the solar business who started like a traditional Nigerian sales marketer earning peanuts.

But Sunday was inspired by his ambition to try “what his hands can do” and he rose from earning a paltry N5,000 to quietly opening a business, King Solar, in Port Harcourt.

As global demand for energy improves, investment in solar energy have seen significant improvement globally including countries like Nigeria.

The global demand for energy had increased by 4 per cent in 2020 and 4.6 per cent in 2021, according to the International Energy Agency (IEA) estimates.

Last year, global power sector investment had increase by around 5 per cent to over $820bn.

Renewables energy sector dominates investment in new power generation and is expected to account for 70 per cent of 2021 total of $530bn spent on new generation capacity, IEA revealed.

“I got introduced to a marketing job (solar products) in one firm in Uyo, I was doing the sales and telling people about the company. But I later picked interest in knowing more about solar and when I went to market products and they ask do you know about batteries? Can you install a household system? It looked strange to me so I had to pick up interest and left my comfort zone in Uyo to Port Harcourt for a training,” the Port Harcourt based businessman told THE WHISTLER.

Getting a good job for a Nigerian graduate has become very difficult as unemployment rate has grown to 33 per cent in Africa’s largest oil exporter.

Sunday said, “I left my course of study (environmental science) for another trade although I have had passion for skills. I grabbed the little opportunity to follow my passion which has an indirect relationship with what I studied. “ 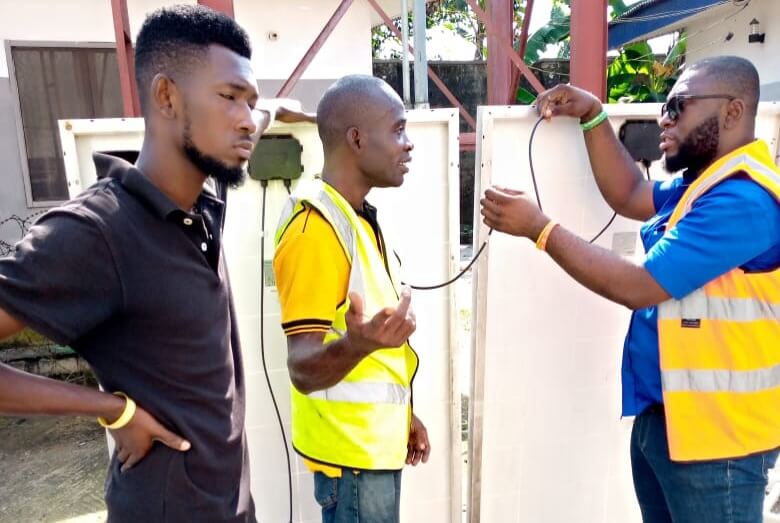 The entrepreneur narrated that after his training on how to install solar energy in Port Harcourt, he went back to Uyo to market his new skill, but the environment was hostile, because many of them already believed solar was for the rich.

“When I finished the training, I went back to Uyo and started talking to people about it, but it did not work. People where like, ‘solar?’ They did not receive my message because people who first introduced solar to them did not bring up good argument for solar and even installed substandard items for them.

“Talking to people then was very difficult. In fact, they said it was expensive. The message was easier in Port Harcourt, because of the calibre of people there. In Uyo, most of the people who can afford solar are the political class.

“I had to leave Uyo and went back to Port Harcourt and worked with a man who installed tower antenna. There I learnt how to climb, I learnt how to install masts down to the configuration. But I was not satisfied, because I wasn’t earning well. In some sites, we worked for two to three days and they paid N5,000, but I continued my online advert on solar,” he narrated.

According to him, online advert and his first paid job awarded to him by his uncle were the magic wands back in 2019.

“Currently, one of the pressing issues facing solar adoption is access to dollar and exchange rate. The increase in the price of dollar affects the market value of batteries, inverters and panels. When dollar rises, even those who have old stock add to their prices making it more expensive for people. I did a quotation of N1m, after two weeks, the price of dollar rose and it altered the quotation I gave. This is a big barrier,” he said on challenges faced in the industry.